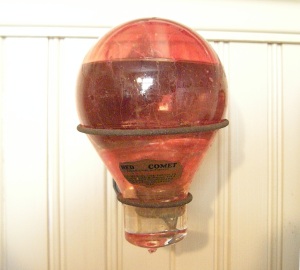 The gas had almost dissipated when they found Minerva sprawled between the racks of charcoal-enhanced portraits. No one knew what she was in the attic for or how long she’d been up there. If she’d fallen a few feet further to the left she’d hit have hit the edge of the Victorian mortuary table. Even in death she’s a bit short of the perfect joke.

Her body is at the wrong angle to have fallen off the folding step ladder. She must have put one foot on the shelving unit to reach something up high. There’s no way to know if it was the box found broken on the floor, or the graniteware coffee pot found under her body. It is clear the box of fire grenades fell some distance and hit the floor with enough force to shatter four of the six globes inside. Carbon tetrachloride inside the blown glass globes would have turned to gas instantly. At the time of the investigation it was impossible to determine if the effects of the gas were enough to cause the victim’s fall, or if the non-cooled attic was at a sufficient temperature that summer afternoon for the carbon tetrachloride to create phosgene gas and poison her.

No foul play is suspected.