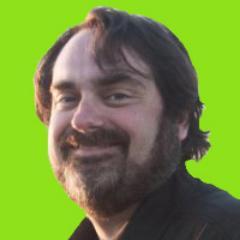 Today I’m catching up with Andrew Penn Romine. Andrew is a writer and animator. He can be found on the internet at http://www.andrewpennromine.com/ http://www.inkpunks.com/ and on Twitter.

Minerva Zimmerman: So, the first thing I want to catch up on is how your research went when you headed to the Midwest? Did you visit a lot of places?

MZ: Yes. I haven’t caught up with you in forever!

AR: Hah! I guess it’s been awhile! So last summer, right after I wrapped at DreamWorks, my wife and I took the opportunity to drive back east to see family. On the way back, we decided to route through Kansas, Oklahoma, and Texas because my current WIP is set in the Dust Bowl, and I wanted to get a real feel for the country. And I did! It’s flat, hot, and very dry.

MZ: Flat in particular seems such a foreign concept to me.

AR: When I tell folks from those areas that we made a special point of driving through, they laugh and say “well, you only needed to drive a few miles, and you probably had the whole picture.” So you’ve mostly lived along the coast, and mountains?

AR: All beautiful areas.  And so are Texas, Oklahoma, and Kansas, though especially in the western parts of the states, the beauty is stark. I’ve always been fascinated by the beauty of places like that. I love to drive through the desert. You can see for miles.

MZ: I like the desert as seen from a comfortable car with AC

AR: Haha! Yeah. it’s easy to love it that way.  My sister used to live in Tucson. We have friends who live there now. We love to visit, but try to time our visits in the winter or spring.

So getting back to original question… the trip was mostly driving, though we did hit some small town museums and got some local history. It was sort of an impromptu trip, so I didn’t have time to schedule any interviews or that sort of thing.

AR: Oh yeah. We even had a little dust storm blow through while we were in Dalhart, tx. You can read about it, you can watch a Ken Burns documentary, but nothing like feeling the sting of grit on your face.

AR: (i should say though, what we experienced was not even a fraction of what they used to get though.) I mean, we could still see the sky.

MZ: Yeah, my grandma lived through that. It’s weird to think about her stories cause she got married at 16 and then they left everything behind to go to the West Coast to try and make a new life and still lived in complete poverty, with lasting health effects of the lack of food.

AR: Yeah. Physically and mentally, it’s hard to get over that sort of hardship.

MZ: I just can’t even fathom that kind of hardship

AR: No, I feel pretty fortunate that for all of my lean times, I’ve never experienced anything that extreme. There are people that do, though. Every day.

And you can look at pictures from that era — and everyone looks about 20 years older than they actually are. To have experienced that sort of hardship, though. To survive it. I have utmost respect. And it’s one of the reasons I write about the period.

MZ: And now you’re back doing animation too. Did you enjoy a break from it?

AR: It’s always good to switch gears for a bit, focus on a different creative task. I was working pretty hard before my trip, and so it was nice to really dive back into writing. And then, yeah, to dive back into animation again!  Oh, so for your readers, I guess I should be a little more specific about what I mean by “animation.” My day job is in visual fx and animation.  And while I’ve worn many hats and done a lot of different types of work, my focus these days is developing and simulation cloth and hair rigs for digital characters. And then running the characters through shots for the commercial, TV show, or film.

AR: In film, especially, a movie gets made by assembly line…

There’s a different department that handles each stage….

My department is called different things depending on what studio you’re at, but probably the most general term I could use is “Character Technical Director.”

MZ: I think it makes perfect sense that you are a writer, cause technical and artistic goes hand in hand with that too

AR: We deal with clothes, hair, fur, fat/skin jiggle. We clean up the performance of the Animation department to fix objects going through each other (ie, a char’s fingers poke through the cup he’s drinking out of, tc) yeah, that’s true! both are all about performance, but you have to know how to get the performance you want. (true of any discipline, I guess.)

MZ: I guess you deal with a lot of artifacts too! Just a different kind 😛

AR: Heheh yes! my ways of working are similar.  Lay down the broad strokes first. Get a sense of where you’re going, what you want to accomplish. Do a refine pass.  Then another, then another.

until it’s done.  which sounds simple. it’s not.

MZ: it never is, and no one ever tells you that there’s no good way to know if anything is ever really done, mostly you just get to a certain point and push it out the door and pray a lot

AR: Yeah, though in vfx/animation, the movie DOES have to get released sometime…

AR: so there’s a fair amount of.. negotiation between getting the shot done right and just getting it done to hit the deadline. It’s a good balance, most of the time. Oh yeah. In fact, my most successful writing ventures of the last year or so have been to antho calls with specific deadlines in mind. Not all of them have ultimately been accepted, but it was a great motivator to get some stuff written

MZ: yeah, me too. Not doing so well for acceptances this year and at least one of the projects I decided to trunk indefinitely

AR: I’m sorry to hear that. Though sometimes, it seems trunking is the best option

MZ: Yeah, i think ultimately it was too specific to the call and more personal catharsis than marketable story

AR: And sometimes you have to write those stories. To practice the craft. To get it out.

And who knows. Nothing has to stay trunked forever.

MZ: I might steal aspects of it at least

MZ: I find that happens more and more over time.

AR: Yeah. I can’t speak for all writers (let alone you) but for me — I’m less obsessed about making sure everything I write is 100% marketable. I’m more interested in the experience of writing it. Er, don’t get me wrong. I’d LIKE to have others read it. get paid. Be showered in the adulation of my colleagues and friends…

MZ: Yeah. I had a specific anthology call in mind for this story.

AR: Yeah. and that can be tricky because you get so focused on making sure that one market will love it, and it may not be as successful elsewhere. But like you said. Pull out the guts, rebuild it.

MZ: Well, I think I could have sent it to another market, I just decided that it ended up more catharsis than story.

AR: Yeah. So what are you working on these days?

AR: i know the feeling!

MZ: It’s been nice to get back into longer stories with established characters.

AR: Are you back to working on a previous project, ie, a setting/chars you’re already familiar with or are you starting something new?

MZ: I’m getting ready to dive back into a previous project for in-depth editing.

AR: Nice! I finished a draft of my book last year (sigh) and need to get back to it. It’s hard to start up after a long absence, though

MZ: I find the best way to do it is to involve someone else, so you can piggyback off their enthusiasm so a Beta Reader or involved editor or the like

MZ: cause just having someone to talk about story stuff and the characters really gets the writer juices flowing

AR: Yah, for sure.  I’m pretty positive there are going to be some significant rewrites

but hey, that’s part of the game.

MZ: I’m doing a post-write outline right now putting all the scenes into a spreadsheet so I can look at all the different parts in one view

MZ: I do something sorta similar but my own version of Justine Larbalestier’s spreadsheet here http://justinelarbalestier.com/blog/2006/09/06/how-to-write-a-novel/ but I do it after the story is at least 60% done at the earliest

MZ: I don’t like doing an in-depth pre-outline, cause it destroys a lot of the discovery process

AR: I agree. It’s good to have an idea of where you’re going, but discovery is most of the reason *I* write.

MZ: I’ll write up directions, but I don’t draw a map until I get lost. The other thing you’re known for, is being something of a mixologist. Any new favorite cocktails recently?

AR: Ahh. Another fun subject. I was definitely hardcore into mixology a few years ago. My interest hasn’t exactly waned, but the way life’s fallen, I tend to mix (and drink!) less these days.

(Not a bad thing maybe?)

Still, though, it’s a passion of mine

MZ: I got a huge sampler of Fee Bitters recently, and I’ve been using them in seltzer more than cocktails 🙂

AR: Oh that’s a great idea! I have an army of bitters bottles, and I’ll often add them to soda water as a digestive

AR: As far as actual cocktails go, i’ve been focused on the classics these days (o, I bet!)

MZ: I made what ended up being sort of a tequila martini sort of thing, 1 to 1 silver tequila and St. Germain with grapefruit bitters

AR: I’ve been making my margaritas lately with mezcal instead of tequila. And a variation on the Negroni (which is a house-fave)

MZ: I’m not sure I’ve ever had mezcal

AR: Oh mezcal is tasty. Smoky, a little like scotch, but with that sort of resinous mouth feel of tequila.

MZ: Do you have a brand you recommend?

AR: Well, I’ve tried a few, though for the value, Del Maguey’s Vida is my fave.

MZ: Cool. I’ll have to try that. I’m a big scotch person, so that’s a fascinating new taste to try.

AR: Yeah, if you like smoky scotch, then mezcal should be right up your alley

MZ: Is there anything else you want to make sure to talk about?

AR: I could talk all night about a bunch of things…

I’m eager to get back to my writing.

Posted in Ghosts in the IM, Writers
Sign up for Minerva's newsletter - Letters From Nowhere