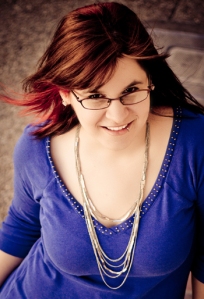 Caroline Ratajski is a writer, software engineer, and editor of Booklife Now. You can find her at http://www.geardrops.net/ on Twitter or Tumblr and on Inkpunks.

Minerva Zimmerman: You just got back from San Diego Comic Convention and omg I keep seeing your Robin cosplay everywhere!

Caroline Ratajski:  By “everywhere” do you mean “I follow you on social media”? 😉

MZ:  ComicsAlliance is not something I saw following you on Twitter

MZ:  Did you post Winter Soldier pics from the actual con? I only saw the test run

CR:  I got one. A friend found it for me. I do not do grumpyface very well, as it turns out 🙂

MZ:  hahahaha That’s a good thing and a bad thing. My grumpyface tends to look like Alan Moore for some reason

CR:  Well, I tried for grumpy, being The Winter Soldier and all, but it didn’t turn out.

CR:  I had a good time. I like SDCC. Been going since 2002. I did cosplay, I got to be press for a panel, even got to film an interview with the creators of the Venture Bros. It was neat being in the little press pen at the front.

MZ: Did you have any tacos?

CR:  You ever hit up Lolitas? I hear that’s the place to go for California burritos.

We went to Oscar’s in PB for fish tacos. The spicy grilled shrimp was off the goddamn chain.

MZ:  I like the little hole in the wall 24 hour places the cops eat pretty much if the cops are parked outside at drunk o’clock you know the food is awesome. I really really miss burritos

CR:  I love burritos. If you’re ever in SF you have to hit up El Farolito. Have you heard about the single-elimination burrito tournament?

MZ:  no. Tell me of burritos

CR:  Oh man. So, they set up divisions for the burrito-off. East, South, West, and California. California is literally its own burrito domain. And El Farolito is at the top of the California bracket, by a lot. I think Lolita’s was number three seed?

CR:  So they’re trying to find the best burrito in the country. Yeah. If it’s El Farolito, I’m going to feel so vindicated. When I first came here, I googled “best burrito in SF” expecting the results to be contentious as fuck. But the first page was like “No seriously El Farolito what are you even doing”

MZ:  Is it wrong to want to schedule vacation travel around burritos?

MZ:  Tell me about GISHWHES. I have never really figured this thing out other than people are super super excited about it

It stands for the Greatest International Scavenger Hunt the World Has Ever Seen.

Since it’s international, the challenges are more to build/craft/do crazy things on camera, and take photo/video of the thing.

Challenges are like… make a dinosaur out of sanitary napkins.

MZ:   …I bet the winged kind are an advantage in dinosaur making

CR:  Or make a video showing a robot getting ready for work, then going to work, then at work doing its job.

CR:  Probably you were forced to do stuff you didn’t want to, with people you didn’t care for? Here, you build your team (although if you don’t fill your team, they fill it for you).

And you only do the challenges you want.

CR:  There’s the grand prize, which changes every year. It’s always a trip somewhere with Misha Collins. This year it’s a trip to Croatia.

Last year it was an island off Vancouver. Year before it was a haunted castle in Scotland.

MZ:  I have no idea who Misha Collins is

CR:   (Misha Collins is an actor also the guy who started GISHWHES) He plays a character on Supernatural.

MZ:  Why is Gishwhes important to you?

I mean, it’s just a week of doing dumb stuff and getting out of your comfort zone and doing weird things.

Hanging out with your friends, building and crafting and filming and how does that not sound awesome?

MZ:  Do you think that’s caused you to write stories you wouldn’t have otherwise? (see how smooth that transition was?)

I’m not sure. I guess I’m still trying to figure out myself as a writer, so I’m not sure how GISHWHES folds into that.

MZ:  learning new things about yourself, being outside your comfort zone?

CR:  Certainly any craft you do informs other craft, and I’ve learned video editing, which has helped me be more merciless with cutting extraneous stuff from my writing.

Like, yeah that’s a cool shot, but does it help with the narrative line?

These videos are only 30s long, so you have to keep it tight.

you just finished a novel draft too

I need to always turn things in right before SDCC.

Makes for a much more relaxing con.

MZ:  🙂 it helps to have a hard deadline

CR:  Last year I got a crit on the first day of con.

me:  yeah, that would make for a cranky day

even when you agree with it

That almost makes it worse.

Because you realize how much work lays ahead of you.

Though that’s how I feel about this draft I just finished.

It’s still too early to do that work though, you need distance, especially on long fiction.

So I’m keeping sharp with writing exercises until another project shows up.

MZ:  any flash fiction come out of the exercises?

CR:  Nothing yet, but that would be nice 🙂

I took SDCC off, so I’ve only done one thing since returning.

I decided I deserved the treat.

MZ:  I keep trying to come up with ways to generate lots of flash and short fiction, but everything seems to turn into longer pieces right now. It’s frustrating me.

MZ:  I have a short piece I absolutely felt was “finished” that 100% of Beta Readers are like “This needs to be a novella”

CR:  You can sometimes throttle a bigger idea, but not always.

Market’s great for those, right? 😉

MZ:  though both of my published novellas were written for a specific publisher

so I haven’t tried to shop one that just came into being on its own yet.

CR:  My fingers are crossed for you 🙂

MZ:  “YOU WERE SUPPOSED TO BE 4K GO STAND IN THE CORNER”

CR:  See, this is a thing I wish more people understood about writing.

A lot of people feel like it’s a zero-sum game.

Like, if you sold your novella, that’s a novella I couldn’t sell, or something.

But really, if you sell a novella, that means there’s a novella market.

CR:  And that’s just wins all around.

there’s not less love to go around.

MZ:  …well, I mean I suppose maybe mothers might love a clone of a child they already have slightly less, but that’s not really what we’re talking about

CR:  Speaking of clones, do you watch Orphan Black?

MZ:  I’m woefully behind on everything.

I haven’t even caught up on Season 3 of Korra yet!

CR:  I gave up on Korra at S2. I mean, S1 was okay but… the boycrazy BS was aggravating and the season needed to be twice as long. S2… I only made it four episodes in before I was just done. Though I hear good things about S3.

MZ:  they actually totally redeemed the boy crazy thing at the end of S2. I was pleasantly surprised

CR:  Apparently it’s Korra and Asami are Bros: The Show. Did they? Because holy cow, throw Mako in the trash.

CR:  I’m not opposed to relationship stuff or even girls being boycrazy

But it felt so counter to Korra’s character.

me:  I think you’ll be happy with how they eventually went with that.

CR:  Like, she could be naive about people, but she wasn’t so… destructive about it?

And Mako seemed to bring out that destructive side.

MZ:  it was a more realistic version of teen dating including horrible selfish decisions than I’ve seen elsewhere

MZ:  Any things you want to make sure we talk about? last statements?

CR:  IDK I want to fire off some parting advice but there’s so much advice to give and so little of it is universal, you know? I think the “it’s not a zero-sum game” thing is important. It’s a long haul, and the only way we get through it is by supporting one another.

MZ:  Yes. Only if you’re making exact clones does it even matter a little. As long as you’re writing your own stories, there’s going to be a place for them somewhere.

CR:  And even then, don’t make exact clones. Alter one of your clones so they really like doing the dishes or something. Laundry. Laundry’s a good one.

CR:  Make one of them really dig scrubbing tile.

me:  Also one that makes me cake on demand

CR:  I want a me that does my housekeeping. Yes. Okay so writers, also get into genetics.

And lower your ethical standards. Is what we’re saying.

MZ:  My favorite SF books as a Kid were all about clones and robots.

MZ:   (neither of us are suggesting you do that, unless you can really get us household chore clones like… yesterday. In which case, yes we totally are.)

Posted in Writers
Sign up for Minerva's newsletter - Letters From Nowhere