First of all– I am not dead. I got a cold which tried to take me out like a ninja rhinoceros and had me in bed for a full week. I’m now on prescription cough syrup so I’m going to go quickly to the Conversation here. 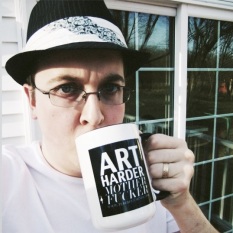 Brian White is the editor of Fireside Fiction Magazine and terrorizes Twitter as @talkwordy and blogs at http://www.talkwordy.com/.

Wendy Wagner is the Managing/Associate Editor of both Lightspeed Magazine and Nightmare Magazine, a regular blogger on the Inkpunks publishing blog and her recent Pathfinder novel is Skinwalkers and she can be found on Twitter as @wnwagner

Wendy N. Wagner:  Hi! Wow, I almost forgot how to use chat. I just realized I haven’t chatted or hung out online in, like, over a year.

Brian:  Where have you been hanging out? In meatspace? You know about the germs, right?

Wendy:  You mean GO OUTSIDE?!? Ack! No! Apparently there’s this giant ball of radiation out there, and it will cook you if you’re not careful.

Brian:  I have heard of this infernal device. I work nights so I only see it as it sinks beneath the hills.

Wendy:  Living in Oregon, I only see it 3 or 4 months a year. It’s pretty terrifying. So how are you this morning?

Brian:  I used to think Oregon was an imaginary place, like Nebraska. But I have met too many people from there at this point, and I am starting to doubt my belief.

Wendy:  If you ever meet Andrew Fuller (editor of 3 Lobed Burning Eye Mag), it’ll blow your mind. He’s a Nebraskan who now lives in Oregon. I’m pretty sure he’s a semi-mythical being.

Brian:  Oh my GOD. This can’t happen. I am still trying to cope with Pluto’s de-planetting. Too much change is bad.

Wendy:  The mind is a fragile thing. That’s why they invented whisky. (As an aside, if you play the game Arkham Horror, you can get the whiskey card and use it restore sanity points. Best. Game. Feature. Ever!)

Brian:  They are wise. (I definitely need a whiskey card.) /hides flask/ But, to your question I am well this morning. Just got a load of postcards to send out to the backers of Fireside’s Year 3 Kickstarter.

Wendy:  Do you actually write on them, like with a pen?

Brian:  Last time I did this, I had, like maybe less than 100 to do, and I handwrote on each. This time I have probably like 600 to send, so I had text printed, and I will sign with a Sharpie. I already have screwed-up wrists, and also shreds of sanity left.

Brian:  Oh man. I hadn’t even thought of that. /pets tongue/

Wendy:  * giggles at the thought * Do you have a special “editorial” signature that you use? I took Mary Kowal’s advice from her beginning writer’s series and invented a special signature for signing books. Of course, after one or two uses, it just devolves into a squiggly line, like my real signature, so I’m not sure how effective it is.

Brian:  Haha. I do not, but I think I would have the same nice-to-squiggly speed. Focusing is overrated. But my handwriting is so bad, I just aim for a legible B at the beginning.

Wendy:  I was a write-in yesterday, and I currently am without a laptop, so I just write manually. I dread reading the stuff! I can usually make out about 1 out of every 7 letters.

Brian:  Heh. That sounds about right. Do you usually write manually, or is that just a without-laptop-induced thing?

Wendy:  I have a desktop computer, and that’s usually what I work on. But sometimes the world just gets too distracting, so I retreat to the porch or the coffee shop with the notebook and the ball point pen. I don’t usually write a lot when I go to manual, but it really helps me refocus.

Brian:  I am still at kind of the hesitant, beginner, stop and start stage as a writer. Which has meant I have fooled around with a lot of tools, often as a form of procrastination. I love the idea of writing by hand, but it’s hardest on my wrists. I have also used things like Dragon to speak words into text. I kind of like that, but it requires a big mental shift.

Wendy:  I like the idea of dictation, but I am really not an audio person. If I had to dictate a book, it would read like this “The dude looked at her. ‘Like, you’re really cool.’ ‘Uh,’ she said. ‘There’s a thing behind you. One of those dead things that eat you know, the stuff inside your head.'” There would be zero metaphor, no depth, and it would be a babbling, incoherent mess!

Brian:  Yeah, it kind of has the opposite effect of writing by hand for me. Dictation can go so fast, you really have to think rather than just fill up a page of rambling. Writing by hand, I sometimes feel like it takes so long I lose the thread of the next sentence before I get finished writing the previous one. I guess I grew up typing, so that is how my brain works. And is probably also why I have tendinitis.

Wendy:  I think we just need titanium alloy tendons or something. I’m ready for a more indestructible physique! So, complete change of chat topic: what made you start Fireside? I can only assume a head injury was involved.

Brian:  That would make it easier to explain, I guess. It was … the best way I can explain it is I kind of had this slowly growing stew of ideas in my head 2011. I had been on Twitter for a few years, starting out mostly talking about copy editing and with copy editors (my “day” job is as a newspaper copy editor) but I had started to follow some writers and stuff too — Gaiman, Scalzi, Wendig first, and then others. So I was starting to see discussions of a lot of things, and they each got plopped into the stew. “Digital publishing models.” PLOP “Payment rates for writers.” PLOP “Make good art.” PLOP And then the thing that made the stew taste just right. “Kickstarter. Crowd funding.” PLOP PLOP. And I thought, “Hey I could do a magazine.” So I started talking to people — Chuck Wendig, Ken Liu, Christie Yant, and Tobias Buckell — about writing for the first issue. And to my surprise, they said yes. And it just kind of snowballed from there. It’s kind of amazing, how with the tools we have available now, some guy can just say, “Hey I want to have a magazine.” And then he does.

Wendy:  That’s pretty fucking awesome. How many other staff members do you have?

Brian:  As far as putting the magazine out, I do most of that myself. Pablo Defendini designed our website and handles the technical issues. Matt White is our submissions manager, and he and our volunteer slush readers are invaluable. I don’t think I could stay alive if I had to organize that. And, of course, there’s the amazing Galen Dara, who does all of our artwork.

Wendy:  Wow, that’s awesome! We have a fairly gigantic staff of volunteers at Lightspeed and Nightmare. I’d guess that I put in over 20 hours a week working on the magazines (I used to keep track, but I have gotten kind of lazy about it), and I can’t even imagine how many hours they put in. It takes SO MUCH WORK to run a magazine. It’s kind of mind-boggling.

Brian:  It really does. Working at a newspaper, where everything is broken down into small tasks, each done at a different person, it’s been really interesting to do it all, rather than just turn my own widget. What sort of things do you handle at Lightspeed?

Wendy:  Well, I have two jobs–Managing Editor and Associate Editor. On the management side, I maintain the production schedule, so I’m setting everyone’s deadlines and making sure everyone comes through on time. I also deal with a big chunk of the website, uploading the ebooks and all the stories/articles/spotlights. I also produce all of our contracts and make sure they get signed and returned on time. On the Associate side, I oversee the submissions and editorial teams. When we have open submissions, I screen all the story recommendations from the slush readers. I work with most of the authors on the line edits for their pieces, and I work with the copy editor to make sure that any questions about the story’s formatting or errors I missed in my first round of editing get resolved.

Most of my job is poking people, cracking whips, and reminding people about their deadlines. Oh, and I’m the Chief Executive Hugger.

Brian:  Yes this is true. I may have a mild sickness here, but that all sounds like a lot of fun, what you’re doing at Lightspeed. I like doing publishing production and background work.

Wendy:  It is fun! I love my job. Of course, the best part is working with all the awesome people. Our staff and writers are some of the coolest, smartest, kindest folks I’ve ever met.

Brian:  That’s something I have come to learn and love about the writing and editing types I have met through Twitter and Fireside, is there are so many smart, nice, and supportive people. Everyone wants to help each other. I guess if none of use are going to make any money, we might as well be kind.

Brian:  So you had your first book, Skinwalkers, come out in March. What’s that been like?

Wendy:  Pretty good. There was some confusion about the release date, so it had kind of a soft roll-out. And I’m kind of a newb about book marketing, so I was really overwhelmed by the whole experience. I really don’t know if I did a very good job promoting the book. But I’ve gotten some good responses to the book, so that’s been nice.

Brian:  Now that you have gotten to the other side of the wall and are a publishing insider, can you share the secret of what kind of cake they serve at the Publishing Gatekeepers Society functions?

Wendy:  I hate to break it to you, but the cake is a lie.

Wendy:  Well, now that I’ve crushed your spirit, I suppose I should sign off. I’ve got parenting to do!

It was great talking to you.

Wendy:  It WAS! We should hang out more often. Fingers are crossed that some day we actually meet in real life.

Brian:  Yessss. This will happen.

Wendy:  Have a great day!

Posted in Ghosts in the IM, Writers
Sign up for Minerva's newsletter - Letters From Nowhere